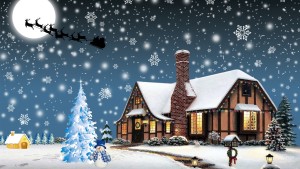 When you think of Christmas, what images do you see behind your closed eyes? Go on. Close your eyes. What do you see? What do you hear? I closed my eyes and I saw a scene of white. Flakes of snow dancing around before blanketing the ground. A  lofty Pine tree in the center towering skyward. The white fluff clinging to the needles. Christmas songs piped in. Rudolph, Jingle Bells, Please Come Home For Christmas. Children's voices laughing, talking, singing. Santa sitting on his North Pole perch. Children on his lap. His spare tire belly rolling with jolly laughter. His rosy cheeks, red lips and white beard animated as each child rattles off their list of coveted gifts. A young girl occupies Santa's knee. Her brother claims the other. He rattles off his list. Big boy things. Not the one's for babies. Santa's attention turns to the young girl, "And you little lady? What do you want?" She doesn't even take time to think. Her answer is swift. "I already have a lot Santa. I don't want any toys. There's just one thing I'd like to have."

I for one hope she gets it. A Secret Love is a story of a family, Derek, Christina, Carl and Katie. The love is stretched thin, tested to the limit. Christmas is a time of giving, selflessness. What if you gave a selfless gift that turned into Pandora's Box? What would you do? Once you begin reading or listening to A Secret Love you wont' be able to stop until you reach the end.

A Secret Love Kindle format is now on sale for $1.99
If you prefer the story to surround you as I do, the Audible book is available. Kathryn Clark does an awesome job bringing this family life.
Give an Audible Gift of A Secret Love this holiday season.

See what others have to say about A Secret Love

Overall
Performance
Story
What did you love best about A Secret Love?
The story was interesting right from the start and kept my attention throughout. The unpredictable twist of the story - the main idea behind the scenes was something that wouldn't have crossed my mind in a million years.


Did the plot keep you on the edge of your seat? How?
The structure of the story was such that it kept me trying to figure how the author was going to put two different scenes together. The husband cheating on his wife, Christine, and Christine being blackmailed.


Which scene was your favorite?
My favourite scene was towards the end where Derek looks at the inscription on the watch he was given as a Christmas present by his wife and children.


Was this a book you wanted to listen to all in one sitting?
I definately listened to the whole book in one sitting as it was very difficult to put down - or in this case, turn off!
Posted by Brigitta Moon Books at Thursday, November 12, 2015